A Deep Dive into the Shark Tank: An Analysis of 9 Seasons of Shark Tank

Starting a business is no small feat. Maintaining success on a consistent basis for a new business can be equally, if not even more challenging than getting through the startup phase. In fact, it’s estimated that more than 50% of small businesses fail in the first four years. We work with organizations of all sizes […]

Starting a business is no small feat. Maintaining success on a consistent basis for a new business can be equally, if not even more challenging than getting through the startup phase. In fact, it’s estimated that more than 50% of small businesses fail in the first four years. We work with organizations of all sizes at SimpleTexting, but as a small business ourselves, we take a particularly strong interest in small business successes.

One of our favorite off-the-clock hobbies is tuning into Shark Tank to see the types of small businesses that are interested in getting a boost from the Sharks. The challenges and triumphs of the entrepreneurs featured on Shark Tank are relatable to other business owners like ourselves. Many lessons and best practices can be gleaned from watching the show regularly.

Our love of Shark Tank runs so deep that we’ve seen every episode. That’s more than 800 entrepreneur pitches over 9 seasons! We recently sat down and compiled data on every Shark Tank pitch and identified interesting trends related to the most successful types of entrepreneurs, the product categories that get the most deals, how much funding entrepreneurs most commonly ask for, and the cities and states that the entrepreneurs in the tank hail from most often. We uncovered some interesting results that may surprise even the most diehard Shark Tank fans. Of the numerous entrepreneurs that have made their way into the Shark Tank over the past 9 seasons, 60% of them have been male. Pitches from females or female teams only account for 26% of pitches overall. The remainder of entrepreneurs are male/female combination teams and, if you’ve watched episodes of Shark Tank before, you’ve probably noticed many of these combo teams are husband and wife duos. These duos are responsible for some of the most successful companies to come out of Shark Tank like Grace and Lace and GrooveBook. While men have historically made more visits to the Shark Tank than women, female entrepreneurs have a more successful deal rate than male entrepreneurs. 60% of female business owners have left the tank with an offer from one or more sharks compared to 52% of men. Interestingly, based on the past nine seasons, women tend to ask for less from the sharks and are willing to give up more than men—which may explain why their deal rates are higher. On average, the investments that men seek are nearly twice as much as women. In addition, women offer the sharks an average exchange stake of 17% while the average for male entrepreneurs is 15%. As a result, the average valuation of men-led companies is significantly higher than those of women-led companies. 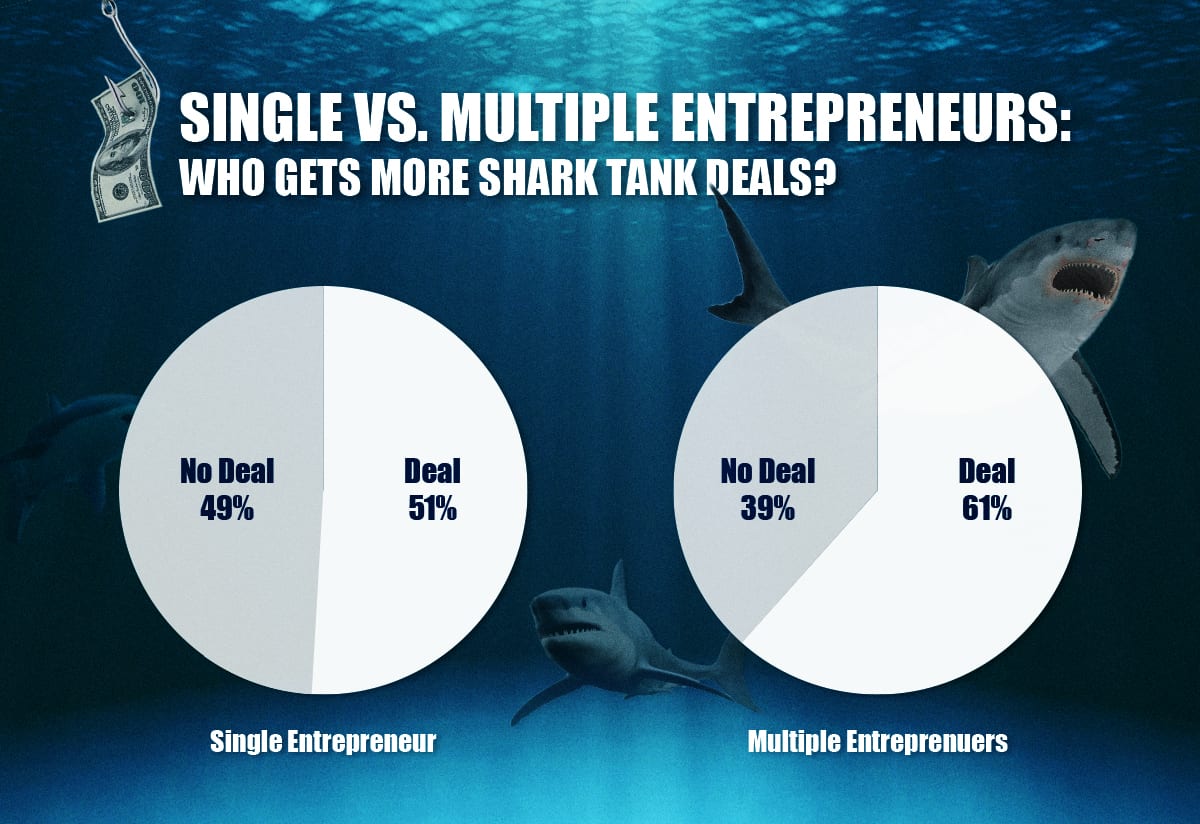 When you incorporate multiple people into a team you bring in a variety of skill sets and perspectives. If the team works well together, this collaboration and partnership can lead to increased success. This may explain why the Sharks have been more willing to make offers to teams of two or more entrepreneurs in the show’s nine seasons than to single entrepreneurs. 61% of multiple-entrepreneur teams left the tank with a deal compared to 51% of single entrepreneurs. Now that we have a better idea of who the most successful Shark Tank entrepreneur is, we next looked at the types of businesses that have historically had the most successful deal rates. Topping the list are baby and children’s apparel and accessory companies. Holiday cheer products also fare well in the tank with 79% of companies receiving a deal. The lowest deal rates on the list are from service-based companies showing the Sharks tend to gravitate towards products rather than services. A lot has happened in nine seasons of Shark Tank. Sharks have come and gone, and even Ashton Kutcher has made an appearance on the investor panel! As the show has evolved, some of the key components of the entrepreneurs’ pitches have too. As you can see above, for the most part, the amount that entrepreneurs have asked for has increased each season, outside of a decrease in season two and another decrease in season nine. The entrepreneurs have been willing to give up less stake with each passing year and company valuations are trending upwards.

There’s an endless amount of information and insights to gain from the Sharks and each and every entrepreneur that enters the tank. We’ve been able to apply many of the lessons we’ve taken away from Shark Tank successes to our business over the years. If you’re an entrepreneur looking to grow your startup, we’d recommend tuning into Shark Tank to see what you can learn. We can’t wait to see what unfolds in the newest season! Texting and Religious Services: A Match Made in Heaven?

Add This Text Widget to Your Website to Capture More Leads