The Most Coffee-Obsessed US States

We surveyed over 3,000 respondents from across the US to rate their coffee obsession. Find out which states need caffeine the most!

Whether in a café or the comfort of your own home, coffee is a time-honored beverage that people across the country cherish and enjoy throughout the day. Hot, iced, sweetened and frothy, black with no cream, you name it and someone’s tried it.

This got us thinking — where in America are people most obsessed with coffee? What larger patterns emerge about people’s coffee preferences and habits?

We took a survey to find out, even answering the great debate of Dunkin’ Donuts versus Starbucks. Find out the results we’ve compiled below!

We surveyed 3,215 American adults across the United States and asked them to rate their coffee obsession on a scale of one to five, with one representing not obsessed at all, and five representing very obsessed.

From there, we could calculate the level of coffee obsession in each state except for Alaska, North Dakota, South Dakota, and Wyoming, which didn’t provide sufficient survey results to analyze. 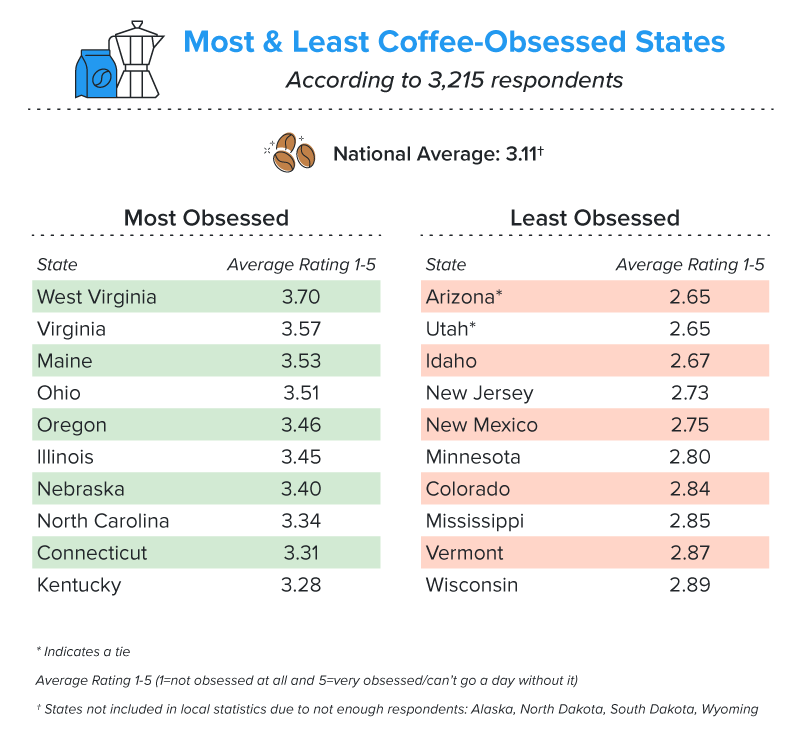 Can you guess which states top off our list as the most coffee obsessed, likely topping off their cups at the same time? Perhaps to your surprise, West Virginia takes first, with the highest average rating of coffee obsession at 3.7 out of 5.

Rounding out the top three are the states of Virginia and Maine, neck and neck at 3.5. Both with colder climates and picturesque seasonal landscapes, it’s no wonder so many residents fall in love with drinking cup after cup of delicious coffee.

In fact, the rest of the top ten follow this same trend. Almost all of the most coffee-obsessed states drop-down to pretty chilly temperatures each year, with the relative exception of North Carolina.

Though don’t let this correlation fool you — there are several wintry states that place closer to the bottom of the list as well. (Washington, the birthplace of Starbucks, falls just outside of the top-ten most coffee-obsessed states, with a score of 3.26.) 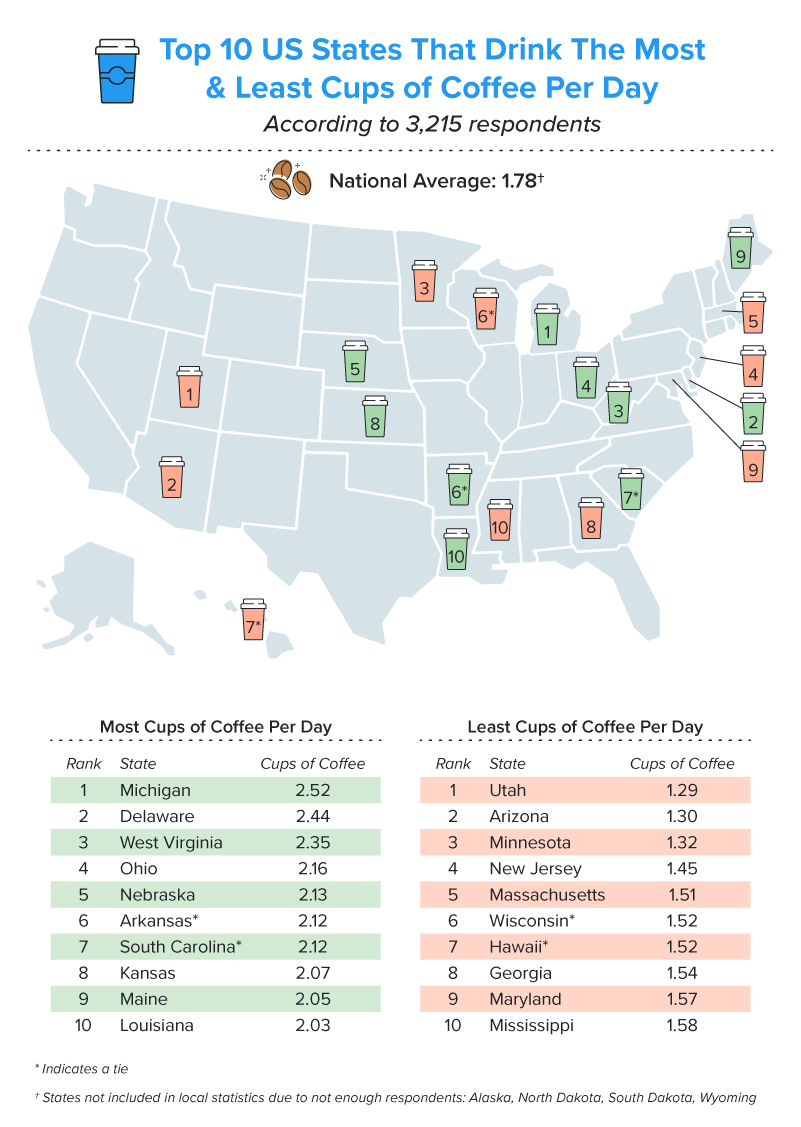 Taking the idea of coffee obsession a step further, for this part of the survey we looked at which states drink the most and least cups of coffee per day.

For the most, Michigan, Delaware, and West Virginia (again!) sit atop the leaderboard with an average of around 2.5 cups consumed per day. We’re surprised not to see states like New York, California, or even Texas in the top ten, seeing that they’re each home to some seriously busy and caffeine-driven cities.

In terms of the states that drink the least cups of coffee per day, Utah, Arizona, and Minnesota make up the top three with around 1.3 daily cups on average.

Other states that clearly have better things to do than drink lots of coffee include Wisconsin, Hawaii, Maryland, and Mississippi. These states are scattered across the regions of the US and make it hard to pinpoint why, exactly, people drink a certain amount of coffee daily. The national average is 1.78 cups. 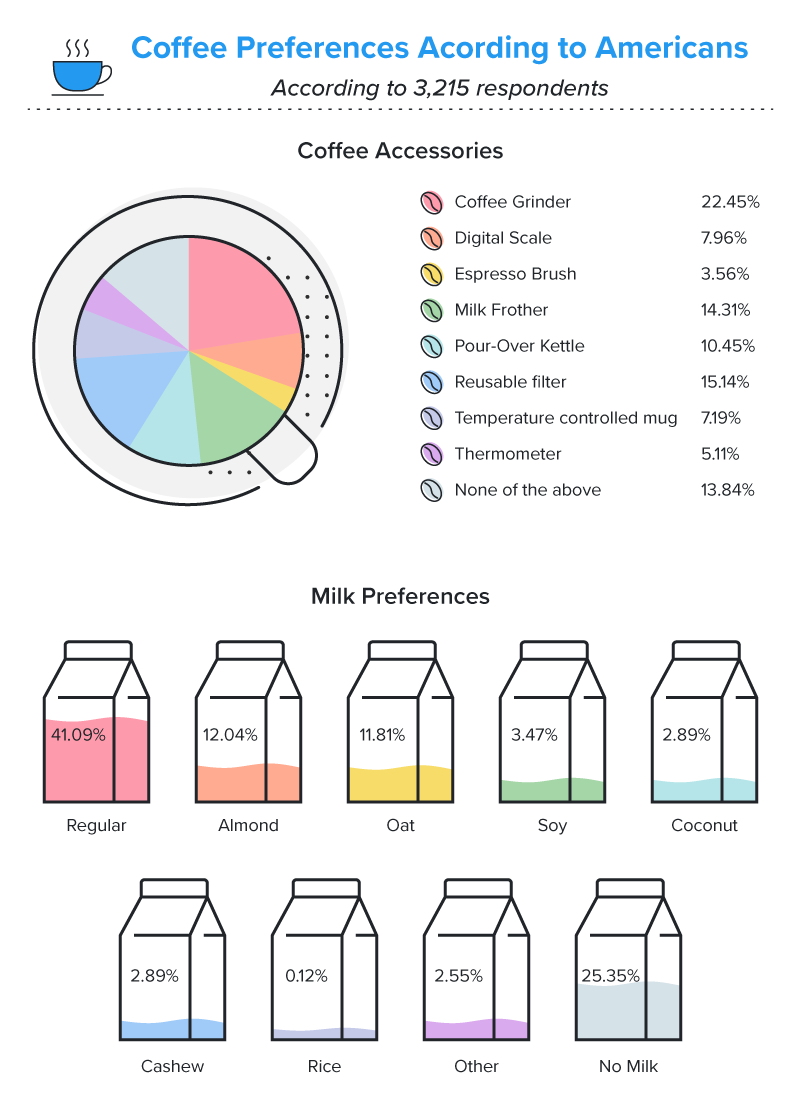 It’s one thing to go buy a cup of coffee from a café. True aficionados have all of the coffee accessories, tools, and steamers for making their favorite cups at home. Unsurprisingly, the most popular coffee accessory is the coffee grinder, preferred by around 22% of Americans.

In terms of milk preferences, the data is clear. Just shy of a majority, regular milk is the most popular at around 41%. Plant-based milk, more common in recent years, is led by versatile and delicious almond milk (at 12%) and oat milk (11.8%). With all of these milk options and tools, people can enjoy anything from a traditional cup to chic cappuccinos and frothy lattes. 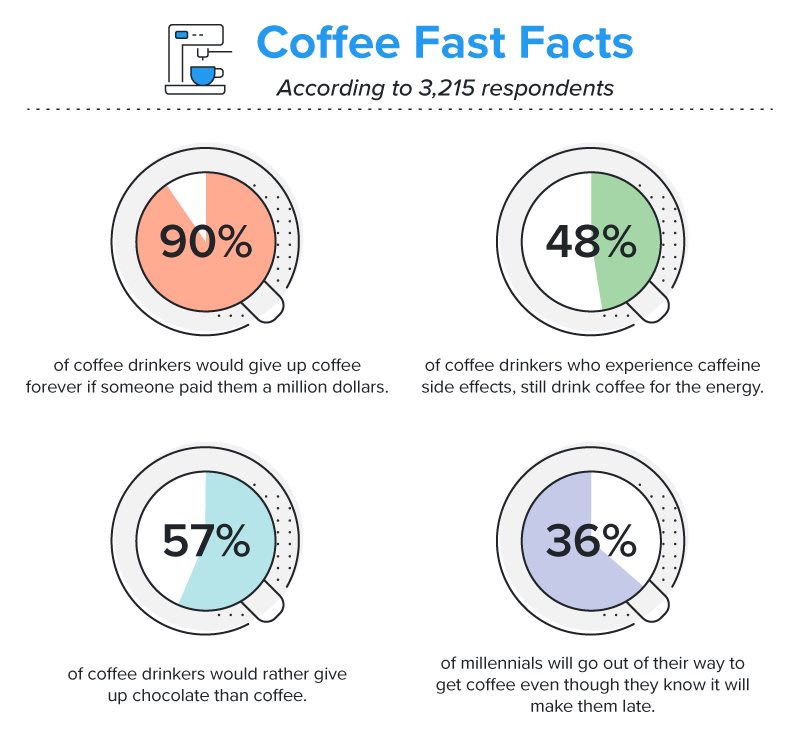 The data gets interesting when you consider that 90% of coffee drinkers would give up their beloved beverage for one million dollars.

One million dollars is a lot, surely. But, nearly half of Americans admitted to experiencing caffeine side effects and still consuming a few cups for energy despite the drawbacks.

36% of millennials also said that they’ll go out of their way for a cup of joe even if it makes them late! We’ll assume this passion for tasteful beans goes away when one becomes a millionaire. 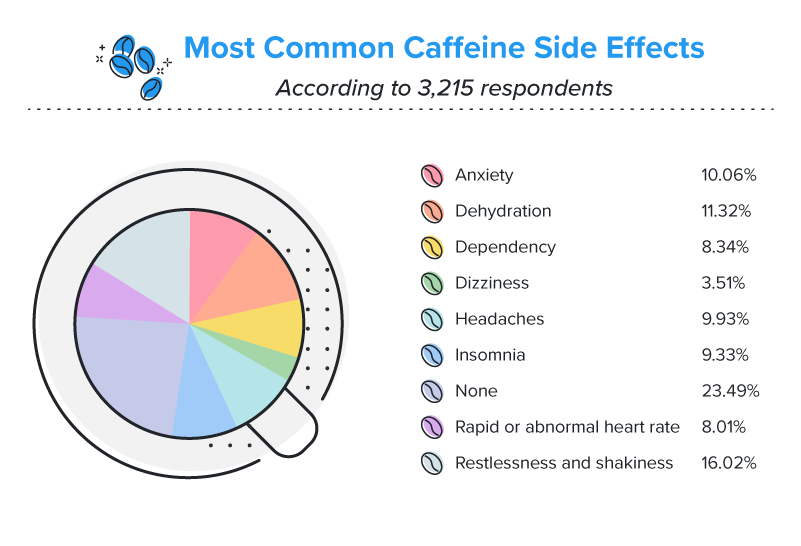 Enjoyed as much for its taste as for the kick of caffeine, too much coffee can have some unpleasant side effects. Although a large portion of respondents say they have no side effects at all (23%), the most commonly reported is restlessness and shakiness, at 16%.

People also note both anxiety and rapid or abnormal heart rates as common caffeine side effects, at 10% and 8% respectively.

Other caffeine drawbacks people noted in our survey include dehydration, anxiety, and insomnia. Despite being the beverage of busy workplaces and college all-nighters, let’s hope coffee lovers don’t forget to space out their lattes and drink plenty of water as they go. 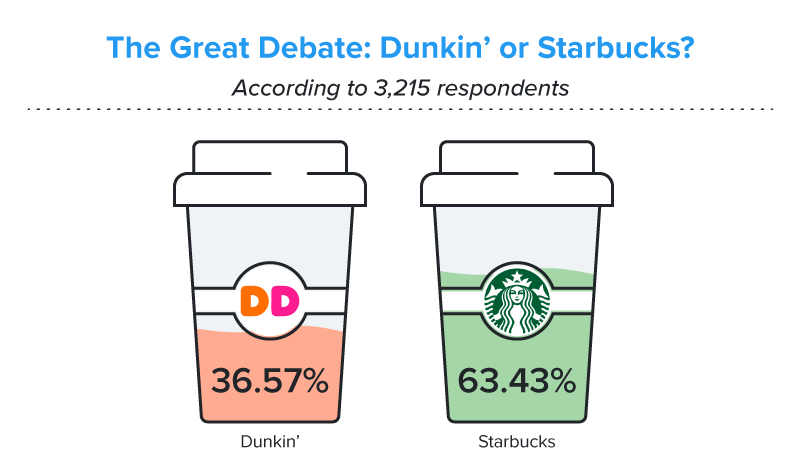 No survey of coffee obsession in the US would be complete without looking at Dunkin’ Donuts versus Starbucks.

This great debate between coffee giants of the last several decades is less of a competition than we initially predicted — Starbucks, preferred by 63% of surveyed Americans, takes gold easily. In an interesting generational twist, almost half of baby boomers (46%) still choose Dunkin’ over Starbucks. I

t’s worth noting that at the time of this survey, Starbucks has over 15,000 locations across the US, with Dunkin’ Donuts hovering around 10,000.

However you pour it, one thing’s for sure — Americans love coffee. In such a vast and diverse country, it’s exciting to see the many ways people consume this timeless bean, whether that’s in the morning, brewed at home, with plant-based milk (47% of Gen Zers), or simply for the energy and uplifting taste.

For coffee shops and small businesses looking to make their customers’ daily routines a little easier, try SimpleTexting. We deliver daily coupon codes right to people’s inboxes every morning, for helpful savings and exclusive reminders for the things that matter most (like coffee!).

SMS marketing services are a powerful tool for communicating with your customers. Learn about the benefits of text message marketing and how to use it.

How to Get More Online Customer Reviews For Your Business

The keys to getting more online reviews for your business are timing, visibility, and honesty. Learn how to master all three and start collecting feedback.

Use this holiday shipping message strategy to keep your customers in the loop and happy over the busy holiday season.