How did Unibroue increase brand awareness for À Tout le Monde, its Megadeth collaboration beer? With a simple text-to-win contest.

When Megadeth founder and frontman Dave Mustaine met Jerry Vietz, brewmaster at Unibroue in Chambly, Quebec, the two got along so famously that they decided to create a collaboration brew as a toast to their friendship. The resulting thrash-beer mashup was the Belgian-style saison À Tout le Monde, French for “to the whole world” or “to everyone” and the title of a 1994 Megadeth hit whose chorus is sung in French.

À Tout le Monde officially launched on October 21, 2016, in the U.S. and Canada. We’re pretty big Megadeth fans, and we’re also partial to beer—but what’s SimpleTexting got to do with any of this? Oh, thanks for asking!

To increase brand awareness for its new Megadeth beer, Unibroue decided to hold a contest. There were two ways fans could enter: 1) by submitting an online form, and 2) by sending a text message.

The prize? One of 10 limited-edition electric guitars featuring a slick Megadeth/Vic Rattlehead graphic and Unibroue branding. After the contest ended, five winners would be selected from each entry method.

Unibroue used SimpleTexting’s platform for the SMS channel. We were keen to hear how things went, so we called up Andreanne Poitras, president of Unibroue’s Montreal-based marketing agency Stretch Mrk. She told us the contest was a success—and that plans for more are in the works:

“We are so happy that we will run three more contests this year.” One half of Unibroue’s execution was a text-to-win sweepstakes that ran in March 2017. To enter, all you had to do was text the keyword UNIBROUE to 555888. You can see the CTA in the point-of-sale piece above:

Here’s how that might have gone down in a text conversation: 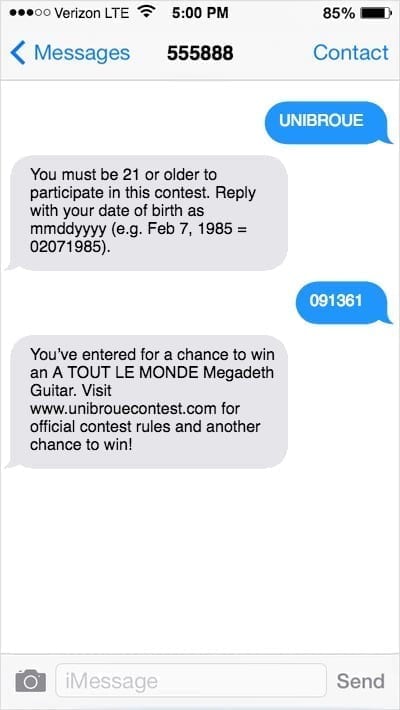 The optional age verification feature is enabled here, requiring subscribers to provide their date of birth before they’re added to a list. In the Unibroue campaign, any underage entrants would have been disqualified: “There’s a lot of regulations in the States that differ from one state to the other, so it’s good to always have contests that can be activated in the most locations as possible,” Poitras said. “One of the best ways to run those contests in the States is via text-to-win.”

Or, as Megadeth might’ve said:

Texting is my business, and business is good!

The other half of Unibroue’s campaign was a branded landing page where fans could enter the contest by submitting their personal information. The page featured the same main CTA copy as the point-of-sale piece, and it also included an invitation to enter the text campaign:

Text UNIBROUE to 555888 for another chance to win 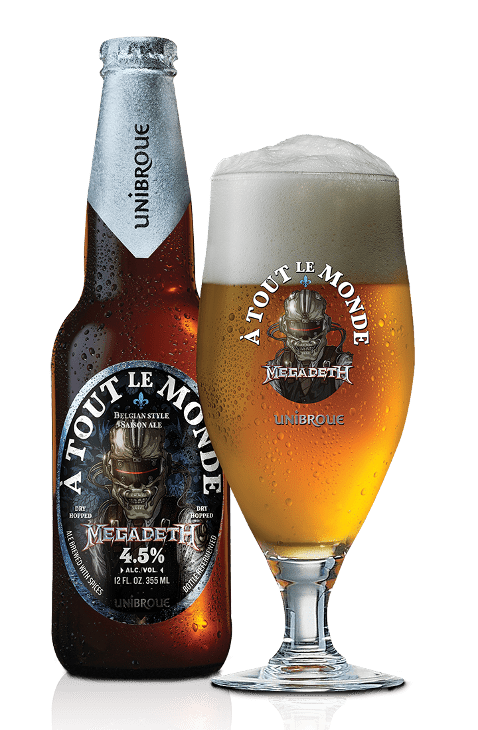 With the successful À Tout le Monde campaign under its belt, Unibroue is now looking at a contest featuring La Fin du Monde, a 9% ABV Belgian-style tripel with more awards than you can shake a tulip glass at. This time the prize is an all-expenses-paid trip for two to “the end of the world”—i.e, Unibroue, where they make La Fin du Monde. (Yep, that’s French for “the end of the world.”)

We hope you enjoyed reading our story about masters of thrash and beer as much as we enjoyed writing it! 🤘 🍺 Do you have any tales of your own about how a text-to-win campaign helped build awareness or meet a goal? Feel free to contact us and let us know! We’re always interested in hearing how people are using SMS.

And if you’re not a SimpleTexting user, why not give us a try? We can’t promise to rock your world or knock the socks off your 5 o’clock taste buds, but we can promise a simple text marketing platform and great customer service. It’s easy to sign up for a trial account—there’s no credit card or contract required.

Enhance your audience experience with event text messaging from SimpleTexting. Keep your audience informed and safe at your entertainment venue, learn more!

With over 50 vendors and a year-round schedule, this Arizona-based farmers market has a lot to share with the community. Learn how they use SMS to do it.

How to Send Text Message Invitations

Grab your guests’ attention with personalized text message invitations! In this article, we’ll walk through why you should use text invites, and how to set them up.